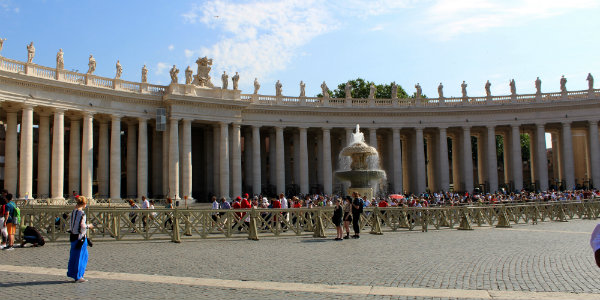 Encompass the World won the bid to plan the Singing Angel’s annual trip, which was organized through the Globus Family of Brands. They spent three nights in Rome, three nights in Florence, and wrapped up the trip with three nights in Venice. The group of 49, including 30 students, landed in Rome on June 29th.

One of the highlights of the trip came the following morning, when the Singing Angels performed for Pope Francis in St. Peter’s Square. The group has performed for the Papal Audience previously, and were honored to be invited back again.

They also showed off their voices at the Church of Gesù, where they were given a tour by Father Bob, originally of Cleveland’s St. Ignatius Church. Coincidentally, they sang in St. Ignatius Chapel, which houses the saint’s tomb.

That afternoon, they ventured 150 miles south to the ancient city of Pompeii. A local guide walked them through the almost perfectly preserved homes, baths and public buildings of this once-great Roman community devastated by the eruption of Mount Vesuvius in 79 AD.

As you can see from the photos, the Singing Angels brought beautiful weather with them to Italy, and Bill says there wasn’t a cloud in the sky for the ten day trip.

Back in Rome on Day Three, the students soaked up some history with visits to a few of the world’s most famous landmarks, including the Vatican Museum, Sistine Chapel, the Colosseum and the Pantheon.

On the way to Florence the next day, the Singing Angels’ Motorcoach stopped in Assisi to visit and perform at the beautiful Basilica of Saint Clare. They enjoyed at a local restaurant before making their way to their accommodations in Florence.

Day five was all about experiencing Italian food and culture. The Singing Angels group explored the Academy of Fine Arts, where Michelangelo’s famous sculpture of David is located. Before their guided tour of the celebrated Uffizi Gallery, they sampled one of Italy’s tastiest treats at an exclusive gelato tasting. For dinner, they learned how an authentic Italian pizza is made during a pizza party at a local restaurant.

Bill remarked that at many of the dinner and hotel venues, the Angels did impromptu performances, which were very often reciprocated by the staff! Needless to say, there was entertainment nightly.

The following morning, the Singing Angels visited yet another iconic Italian landmark, the leaning Tower of Pisa, along with the architecturally stunning Cathedral and Baptistery on the Square of Miracles.

That evening, Encompass the World sponsored the Singing Angels performance at the Festival Orchestre Giovanili, an event which highlights young orchestras and musicians from around the world each year.

The pace slowed down a bit in group’s final stop, Venice. After a guided boat ride to Piazza San Marco, Venice’s main square, they marveled as they watched Venetian glassblowers create their colorful, elaborate works of glass art.

The students started the next day at Doge’s Palace, the home of the leader of the former Republic of Venice. In addition to being an achievement in Gothic architecture, the palace is now a museum boasting works by Titian, Veronese and Tintoretto.

The afternoon was spent on the colorful, picturesque island of Burano in the Venetian lagoon. It’s a playground for photographers, and it’s also famous for its lace-making industry, which the Singing Angels got to learn more about on their stop here.

Sailing is the preferred and most convenient method of transportation in and around Venice’s canals, and no trip would be complete with a gondola ride. The day before departing Italy, the group cruised through the famed canals, enjoying picture-perfect scenes at every turn. They wrapped up this memorial, musical trip with a farewell dinner at a traditional Venetian restaurant.

Navigating a large group of students through a foreign country might sound like a daunting endeavor, but Encompass the World takes pride in planning and creating a stress-free, enjoyable trip for the students and chaperones. We were able to work closely with our supplier partner, Globus, so that an experienced, knowledgeable escort was with the group 24/7 to facilitate every aspect of the trip, so no time was wasted!

For more photos from Bill’s trip, check out our Flickr album.

Absolutely loved our surroundings! The resort was very clean, comfy beds. On our Anniversary they sent champagne and chocolate covered strawberries. Their private beach was very nice. Went there 3 times and sat on both sides. Went to Eagle Beach & Palm for the day, was nice but very touristy. Had dinner Passion on beach, sunset dinner very nice. We went snorkeling just about everywhere on our own. (Took own equipment) Did the UTV excursion with ABC – very fun! I could go on and on.. just loved it there! Suzanne T. (September 2017)
Read More
☰
Menu
Call Us Now
Search
25975 Detroit Road, Westlake, Ohio 44145
(440) 835-8800
50 Pearl Road Ste 300 Brunswick, Ohio 44212
(330) 225-0600